The Game of the Year: Albert’s All Star Basketball GameFebruary 6, 2018 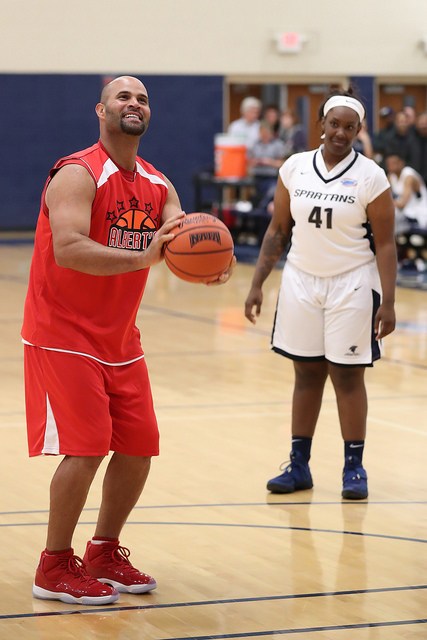 Here at the foundation, we have a hard time picking our favorite event. Anytime someone asks our Executive Director what his favorite event is, he says, “the last one.” So until our next event, the 2018 Albert’s All Star Basketball Game is our favorite.

The Albert’s All Star Basketball Game has been around since 2011, and is the only event we offer that is both for participants with Down syndrome, and open to the general public. If you haven’t attended before, here’s what you need to know.

In early November each year, a 2-day clinic and tryout is held for people with Down syndrome, aged 15 or older. If they don’t want to play in the All Star Game, they are still able to fine tune their basketball skills during the clinic. But those who do want to be on the team are also there to try out. After the clinic, the coaches confer and pick the 12 strongest players from that year’s tryouts. After the team is announced, the All Stars practice once a week from November through January. When the last weekend of January rolls around, it’s game time.

The All Star team is also joined by Albert Pujols, and other current and former professional athletes. This year we welcomed T.J. Moe, Jacob Tucker, Jason Simontacchi, Andy McCollum, Andy and Alan Benes, and Cam Janssen to the team. The All Star team competed against Missouri Baptist University men’s and women’s basketball team.

Even though game time isn’t until 4 p.m., guests start waiting for the gym doors at Missouri Baptist to open two hours early. For the first time, reserved and VIP seating tickets were available in addition to free general admission. The VIP area was sponsored by Visionary Wealth Advisors and treated the VIPs to a pregame meal and reception, with food provided by Longhorn Steakhouse, Sugarfire Smokehouse, and Rocky Mountain Chocolate Company. VIP guests were also able to view the All Star team’s practice and meet and greet with the players. Once game time rolled around, they were treated to the best seats in the house–right behind the All Star team’s bench.

Before tip off, fans heard from Todd Perry, Executive Director of the Pujols Family Foundation, and Missouri Baptist’s Campus Minister led the crowd in a pre-game prayer. Charles Glenn (the official National Anthem singer of the St. Louis Blues) joined Joseph Niemeyer once again in the singing of the National Anthem. Randy Karraker, host of the Fast Lane on ESPN Radio, announced the teams’ lineups, and Fredbird and Spartakus (Missouri Baptist’s mascot) treated the crowd to a ceremonial tip off.

During time outs and halftime, guests were able to go out to the lobby where silent auction items, exclusive Pujols Family Foundation apparel, Cold Stone Creamery ice cream, and Nothing Bundt cakes were for sale. Color Coded Chef provided an interactive product demonstration, and gave away a full Color Coded Chef kit to one lucky raffle winner! At halftime, the Totally Awesome Girlfriends Group (a.k.a. TAGG) performed a dance routine to “Uptown Funk” by Bruno Mars, and the Martial Arts program participants showed off their skills.

Throughout the game, we saw our All Stars drain 3-pointers, toss the perfect setup for Jacob Tucker to dunk, and make some incredible plays. The stands were packed, and fans came prepared with signs supporting their favorite players. Fredbird and Spartakus kept the crowd engaged, dancing down the sidelines and mimicking the coaches.

There was fierce competition on the court, with the game coming to an intense close. With only 23 seconds left and a score of 80-80, the All Star team managed to put up a two-pointer to take the lead. With a final score of 84-80, it was a nail-biter to the very end. As soon as the final buzzer sounded, the court was flooded and the gym filled with cheers from the stands.