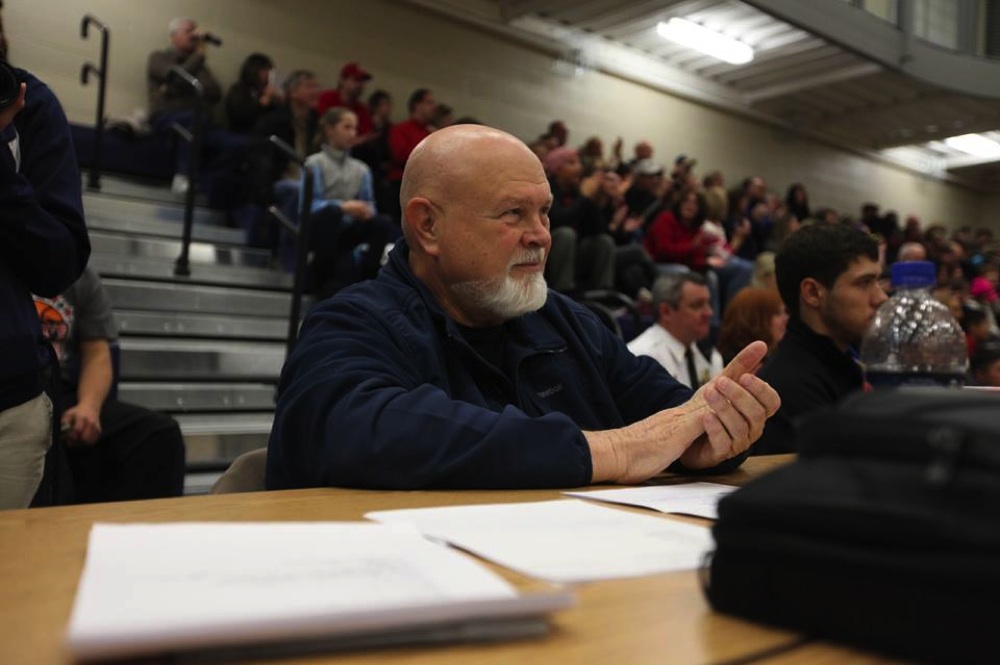 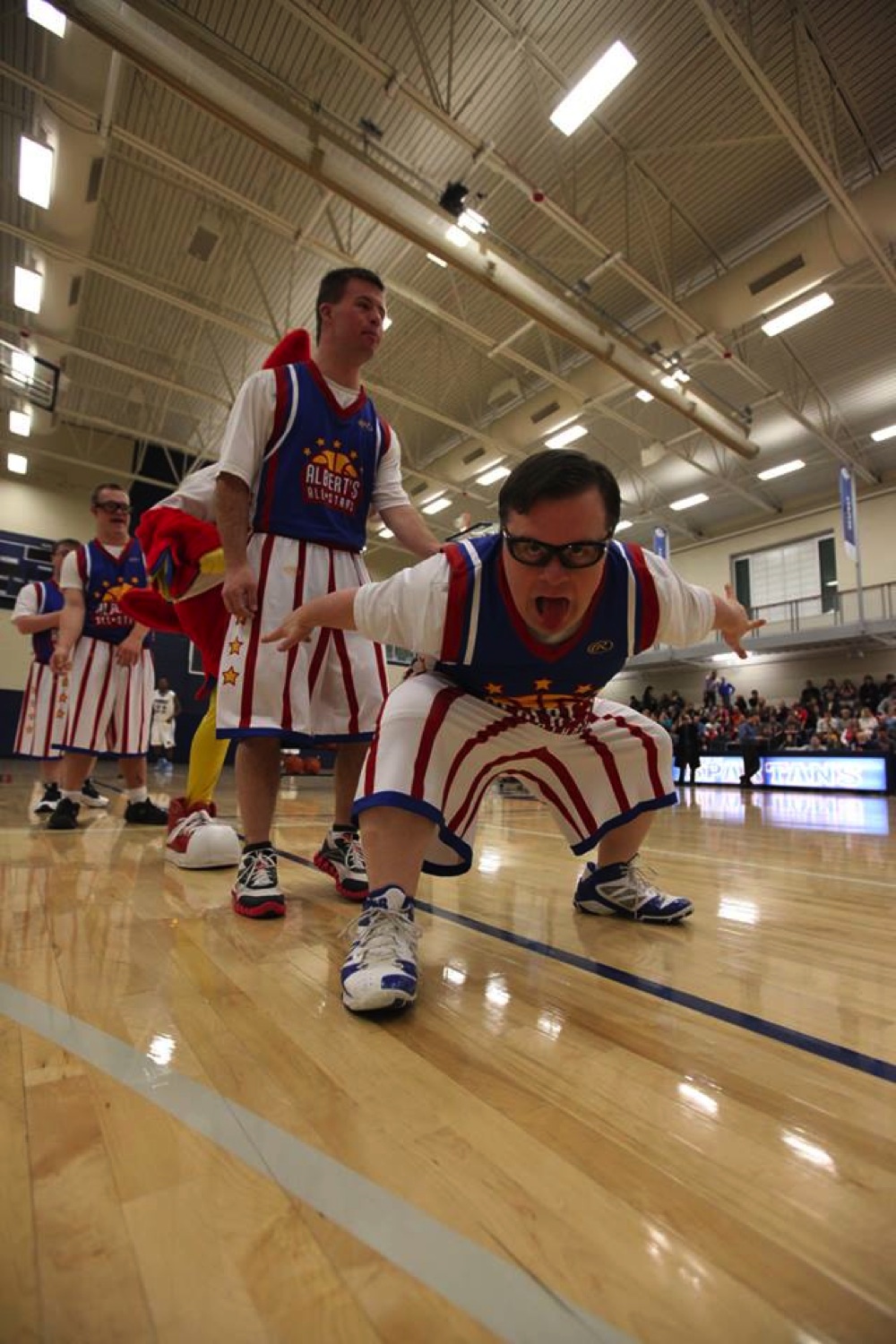 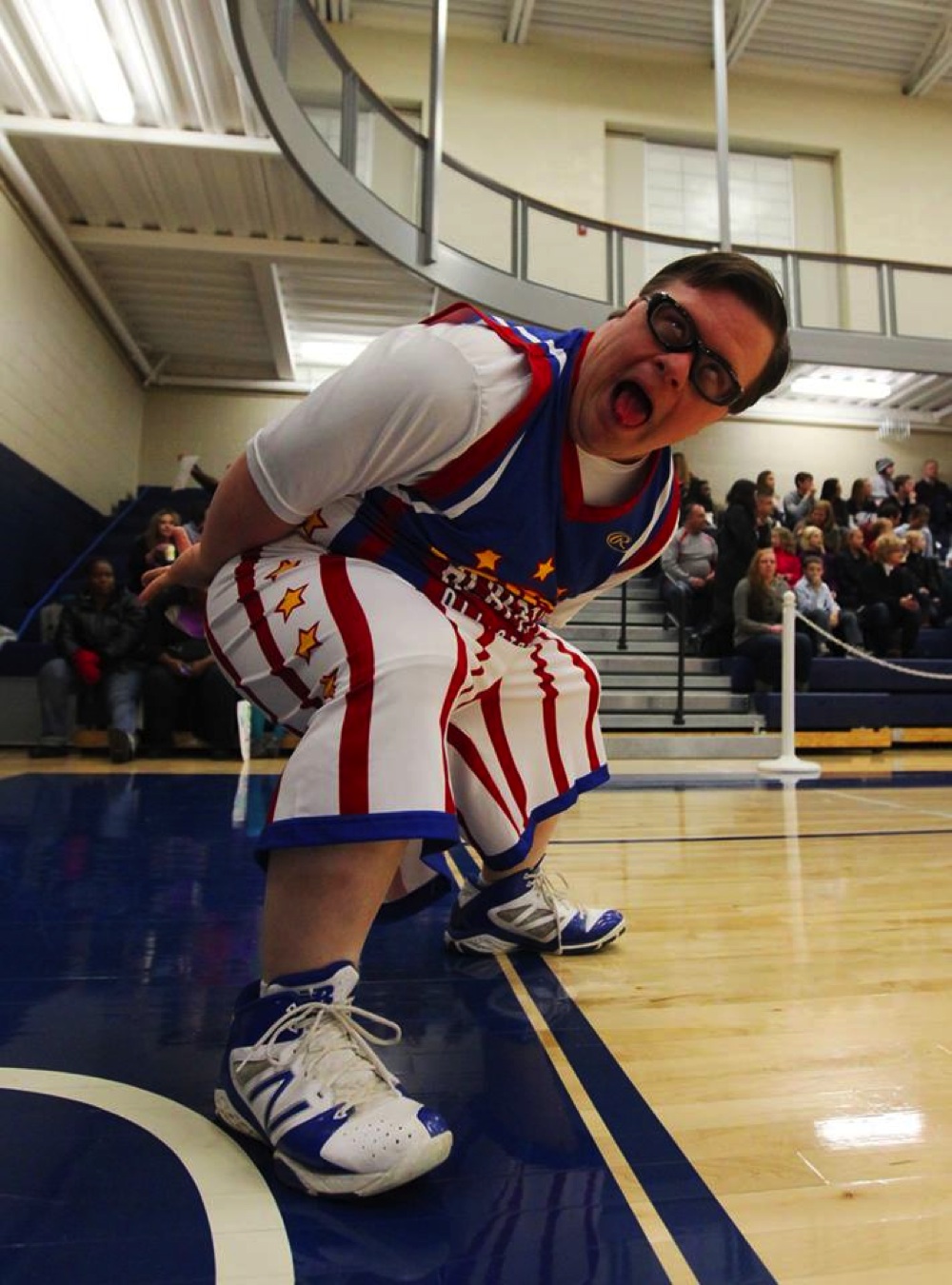 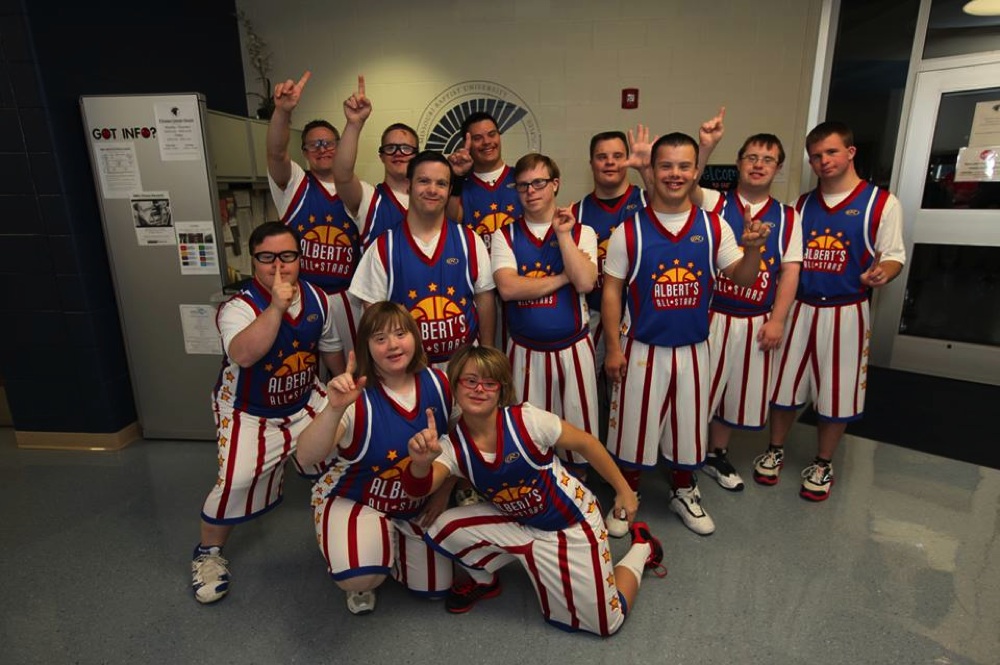 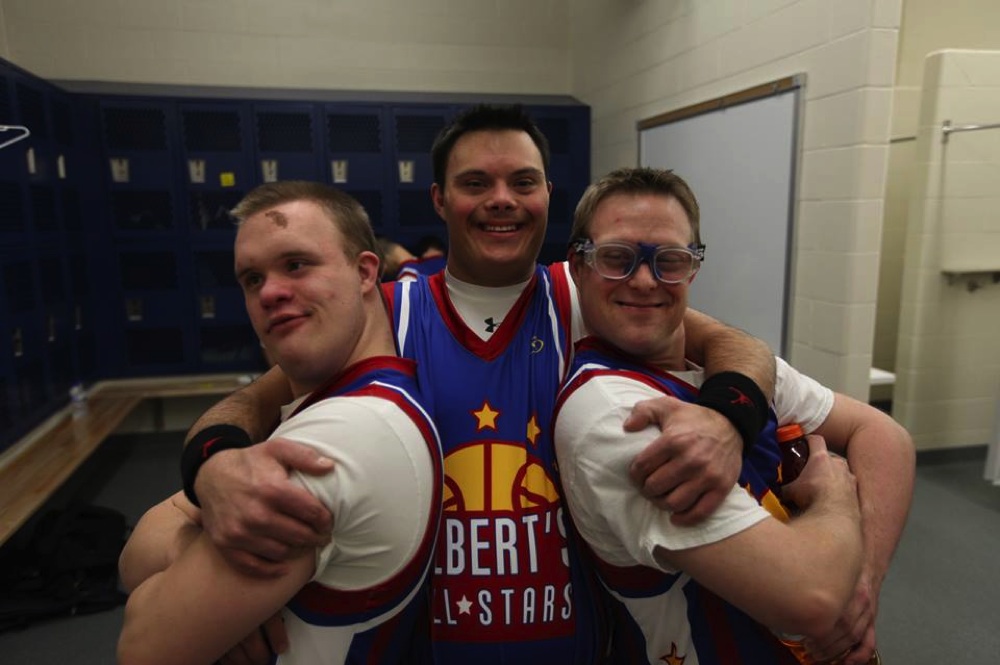 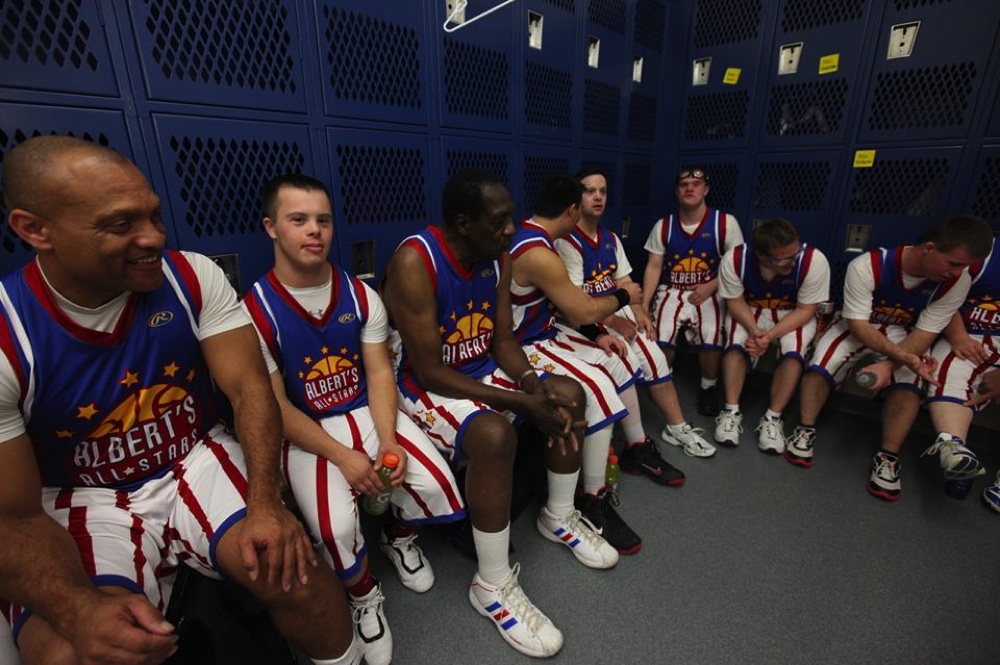 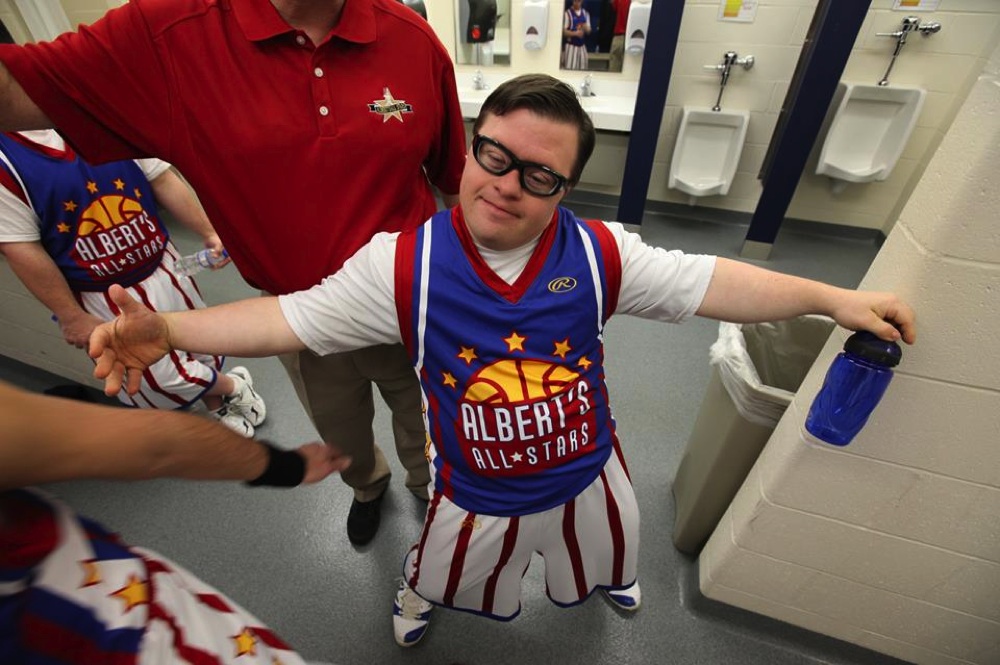 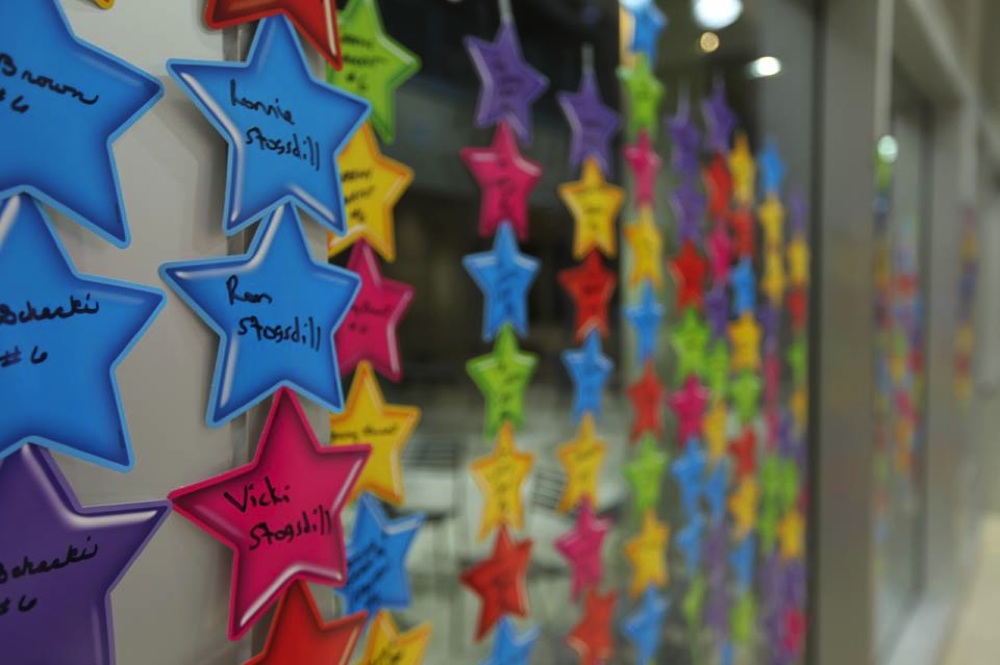 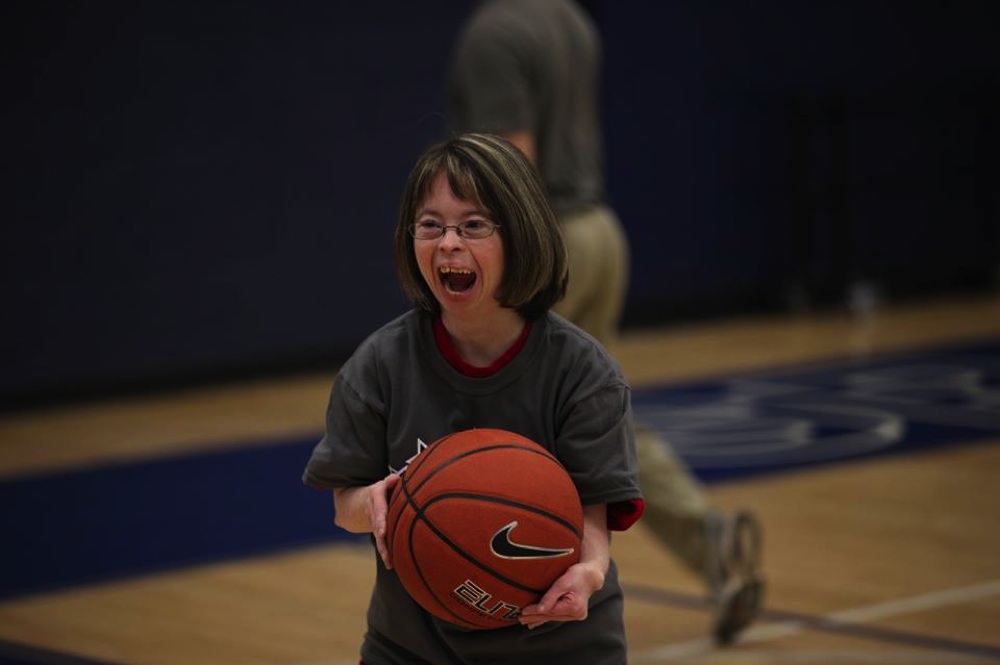 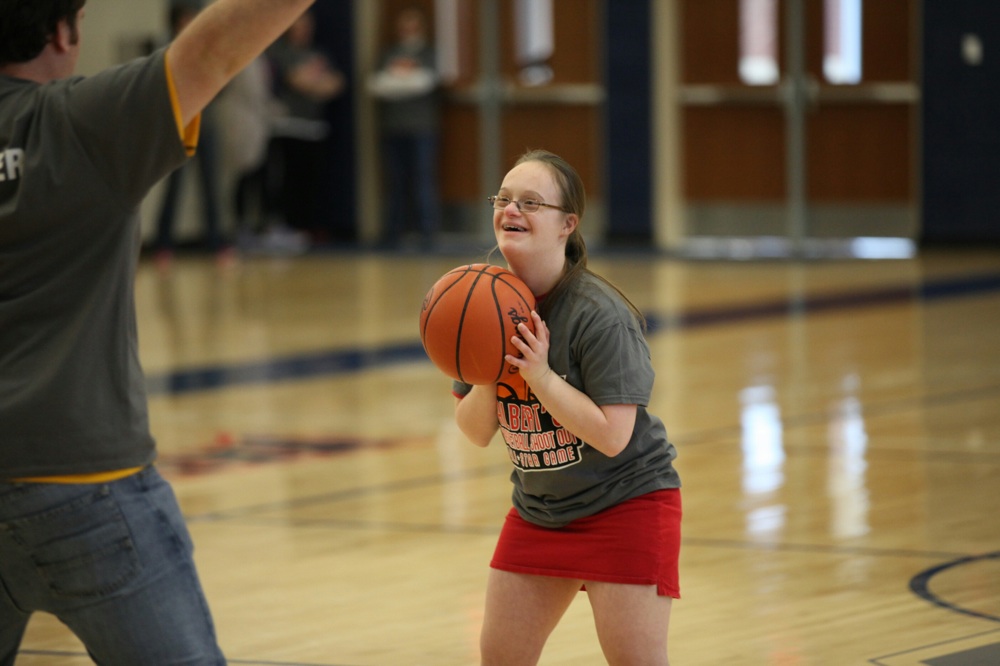 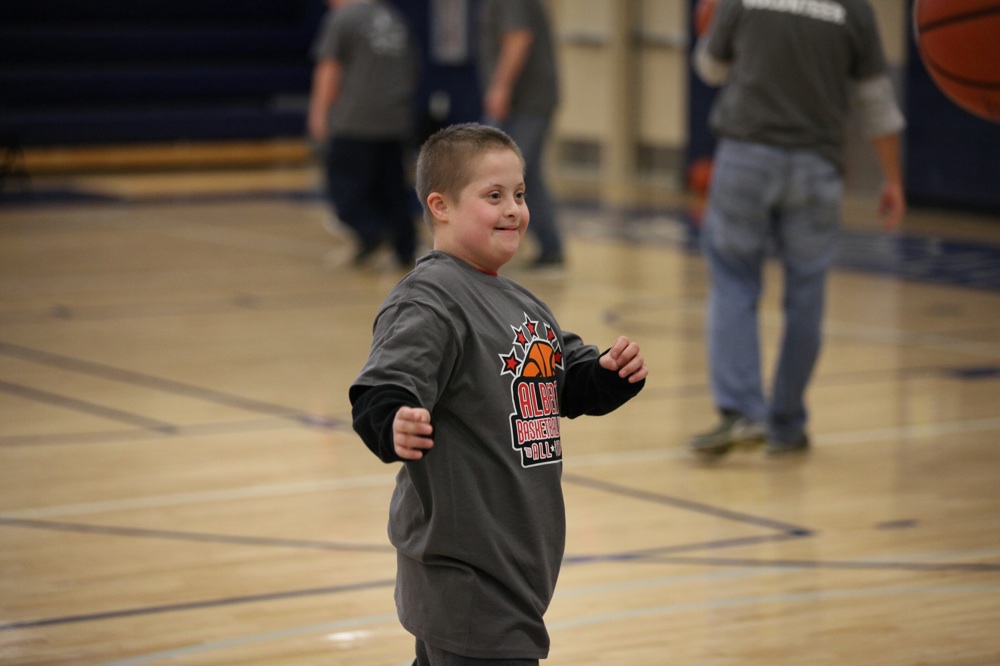 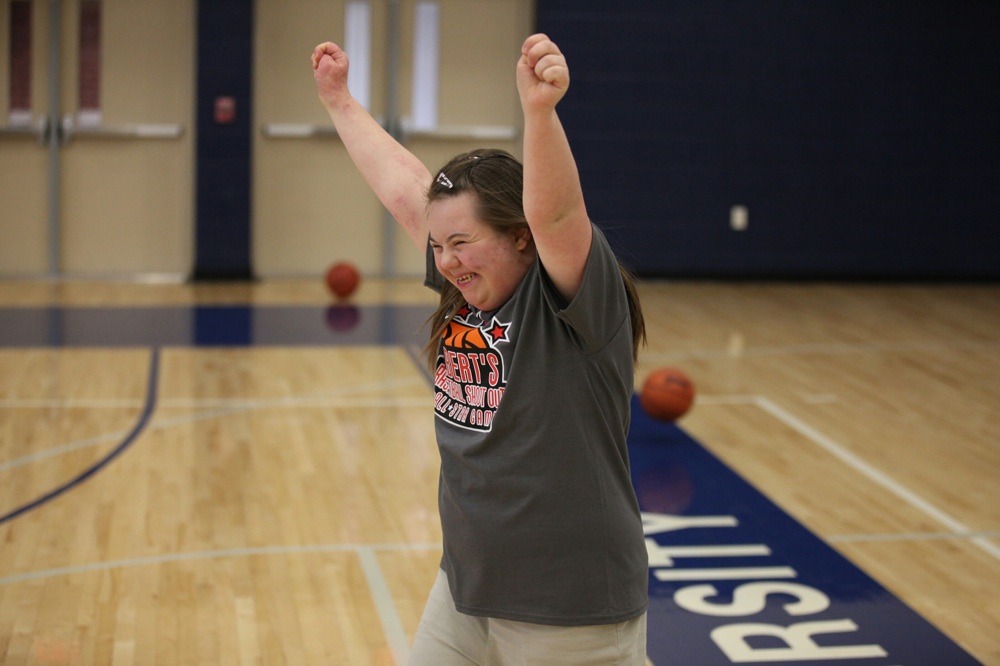 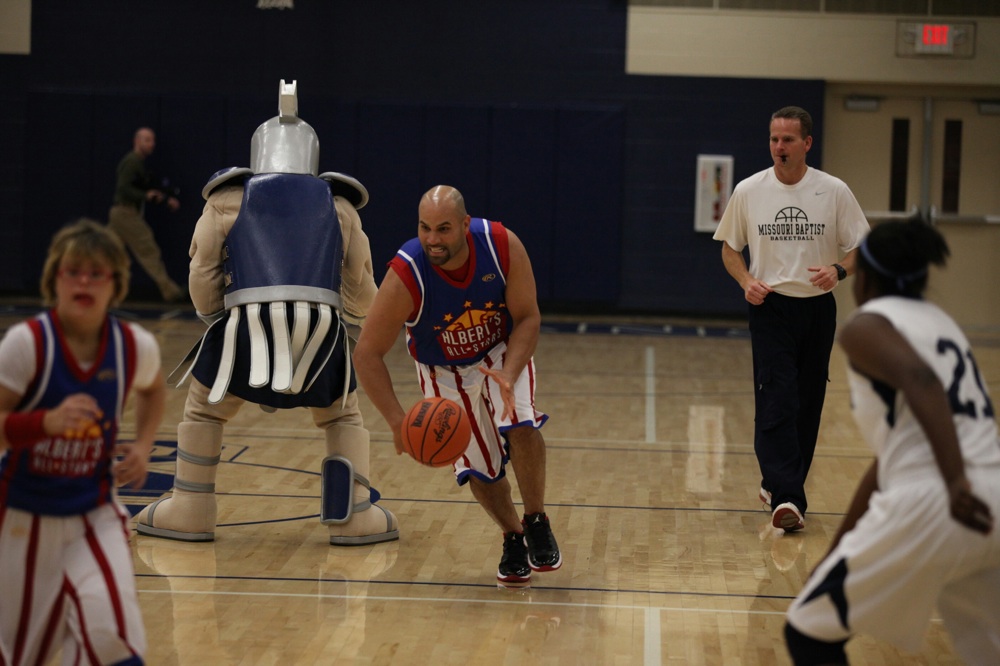 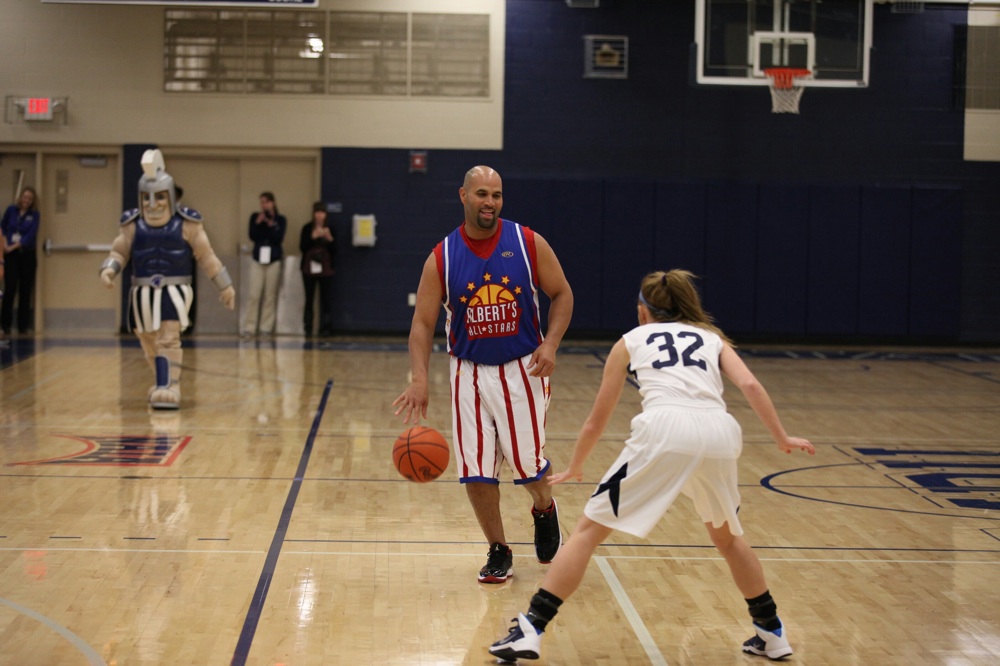 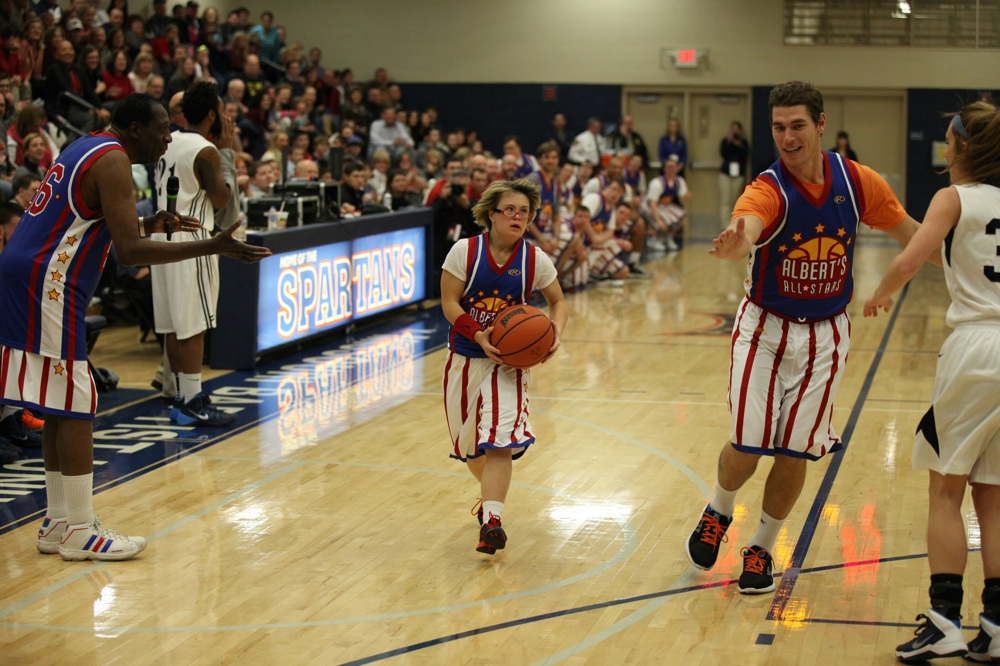 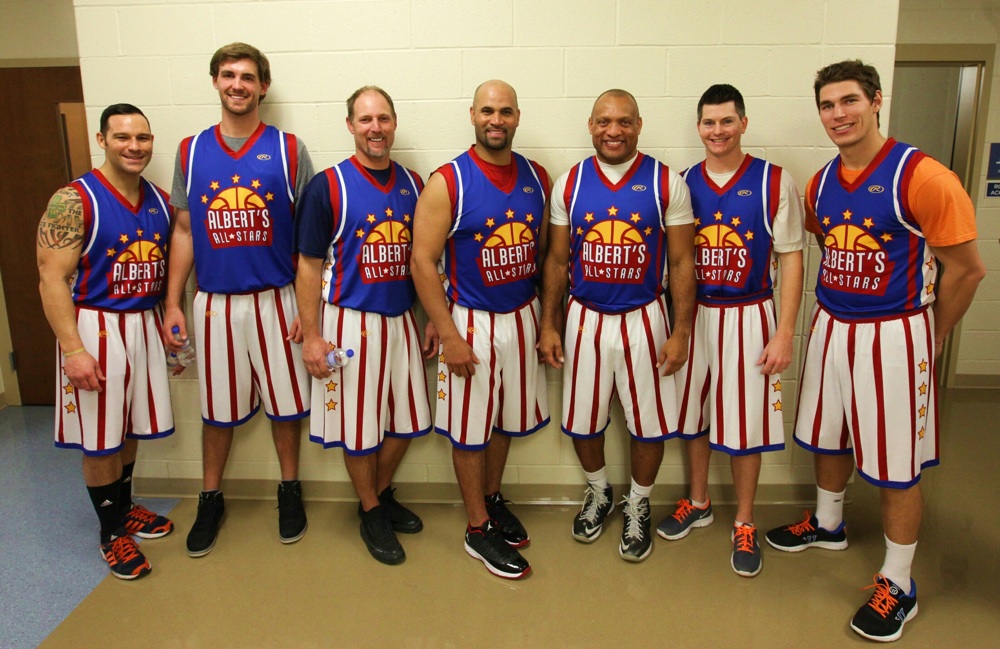 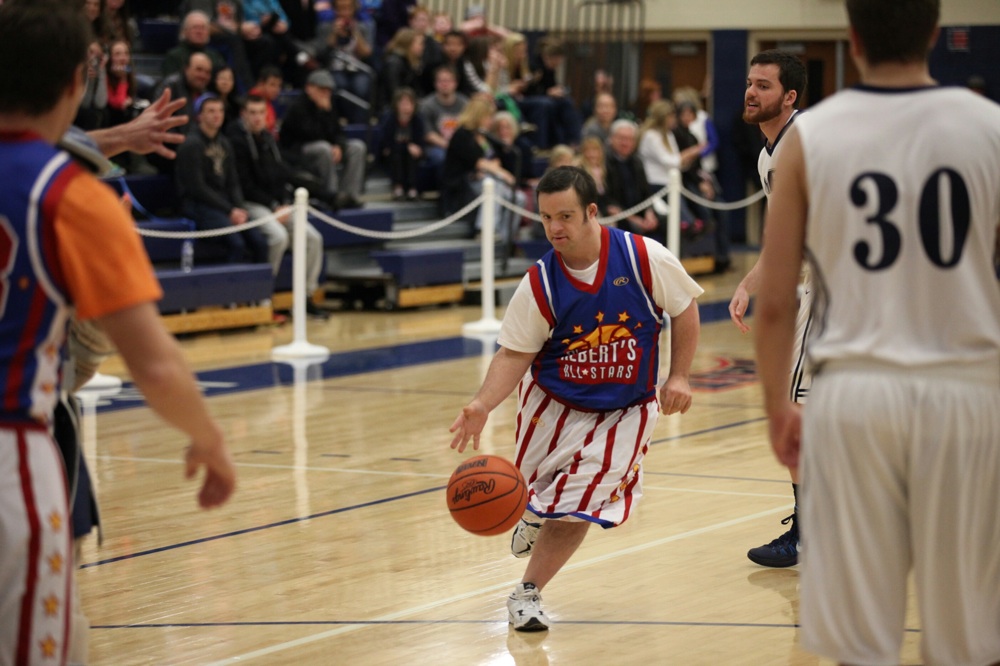 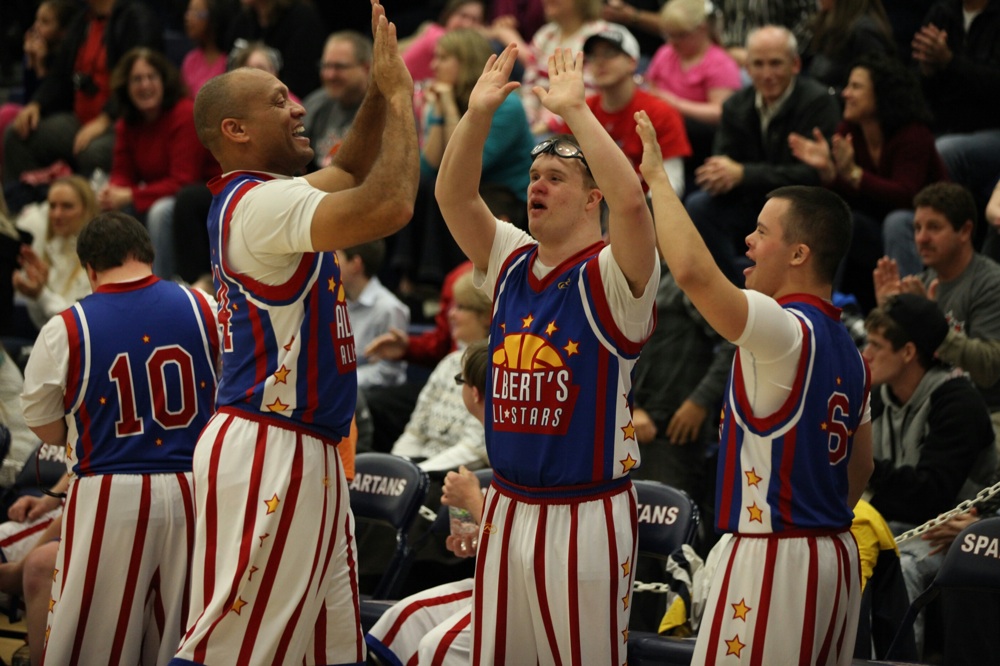 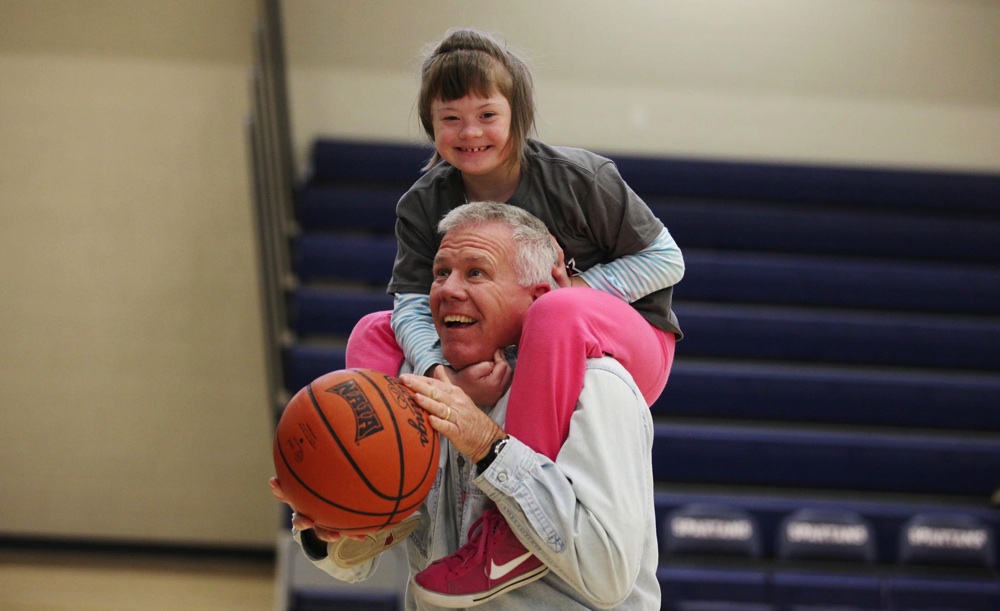 When Lindsey Hawkins sank the 3 early in the second half of Albert’s Basketball All-Star Game on November 24, putting Albert’s All-Stars up 36-28 against Missouri Baptist’s All-Stars, the crowd went wild!

Albert’s All-Stars have eked out some close games in previous Pujols Family Foundation All-Star Basketball Games, but it looked like they might be pulling away for a big win in the 6th annual showdown.

Instead, that big 3-pointer launched a frenzy of offense by both teams, and Albert Pujols and his crew of pro athletes and young adults with Down syndrome suddenly had their work cut out for them if they wanted to defend their title.

Among Albert’s lineup was former St Louis Ram Aeneas Williams, former Cardinals pitchers Brad Thompson and Jason Simontacchi, St. Louis native and MLB pitcher Johnny Hellweg, Blues player Adam Cracknell and boxer Ryan “The Irish Outlaw” Coyne, plus, of course, Albert and his 12 All-Stars, all of whom have Down syndrome.

Decked out in Harlem Globetrotter-style uniforms, and bolstered by the experience of teammate and former Globetrotter Meadowlark Lemon, the All-Stars rocked the warm-up and were ready to rumble come game time.

Smash of The Smash Band handled Emcee duties and the warm-ups even included the St Louis Cardinals’ Fredbird and MoBap’s Spartacus rocking out to Guns n Roses. The stands included quite a cheering section, and the TAGG (Totally Awesome Girlfriends Group) dancers also came and cheered on Albert’s All-Stars.

But Missouri Baptist, under coach Eddie Uschold, put on quite a show too. Led by a variety of 3-pointers, dunks, alley oops from players such as Lau-Ren Jones, Stanley Eboh, Jahmari Gordon, Corey McKinney, Chris Buzzell, Kristyne Smyth and Danna Jenkins, the Spartans kept battling and tied it up at 62-62 with 3 minutes left to play in the game.

But All-Star Lauren Hennicke hit a bucket with 2:30 to play and then put Albert’s All-Stars in the lead for good when she hit a technical foul free throw. She also waved to the crowd and the fans went crazy.

All-Star Brandon Karandjeff, who had some big baskets throughout the game, also helped ice it with some late baskets as the All-Stars went on to win.

Among the many highlights of the night, the TAGG girls, led by coach Brittany Wesley, also put on a great halftime performance, dancing to One Direction’s You Don’t Know You’re Beautiful.

And the Pujols Family Foundation also recognized Central Christian School’s fifth-graders, who have been working on a service project to promote and recognize that all people are created in the image of God.

In the end, the night was all about celebrating the abilities of those with Down syndrome. And what a fun night it was. With many thank yous to the Missouri Baptist athletic department and players for the opportunity. And a special shout out to Albert’s All-Star players and coaches, who logged a lot of hours to prepare for the big night.

Prior to the All-Star Game, the PFF took over the Missouri Baptist Gym for Albert’s Basketball Shoot Out.

People with Down syndrome ages 10 and older were able to take to the court and work on their shooting and moves with some help and rebounding from a crew of volunteers.

“We try to get Clinton involved and get him interaction with others and it’s hard to do that, so this gives him an opportunity to interact with others,” said Forest Williams of son, Clinton, 20, who has been to all of the Shoot Outs.

The Shoot Out was broken into six 30-minute shifts. Upon arrival, players received the Shoot Out and All-Star Game shirt and then were able to enter the court and shoot. About a dozen volunteers helped chase down balls and cheer on some great shooters, while other volunteers and players broke out into games and one-on-one action.

Afterward players were able to enjoy Coldstone Creamery, Smoothie King and Oh Yeah! products and parents could also buy a shirt. Stars were also available to purchase in the name of one of the All-Star players in preparation for the evening’s big game. All of the proceeds from the stars go to supporting the programs of the Pujols Family Foundation. This year’s winner of the Shooting Star Award was Justin Cote. He received ‘Dinner for 25’ compliments of Chipotle. His family has invited the All Star team to enjoy them for their special dinner.

A special thank you to Missouri Baptist University, Rawlings, Oh Yeah!, Smoothie King, Cold Stone Creamery, Chipotle, Hays Companies, all of our volunteers and celebrity guests for making this event another huge success!